Alpha 0.02 is now available on Itch.IO and with it comes a lot of great new features and improvements. I got slowed down by a few critical things that were important to get in there such as the new game settings window. I’m trying to ensure future updates are a bit quicker. If you don’t yet have a copy of Mercury Fallen it’s currently on sale through the end of June!

The worker bot is a brand new type of colonist. The worker bot can only mine/build/haul, but it will do so with a focus that only comes with an electronic brain. Robot workers will always work at full speed and don’t get slowed down when hauling items. They are not currently craft-able, but additional robot workers are scattered around the map to find.

Professions have been removed and replaced with Job Roles. While the interface doesn’t look that much different, you can now select multiple jobs instead of a single profession. Job Roles still level up and function similar to professions.

A new job role was added called haul which controls whether a colonist will haul items to storage. Hint: Robots make great haulers.

Profession outfits had to be removed, but to  fix that I’ve added in the ability to assign custom outfit colors. Yes, you can recolor robots too. 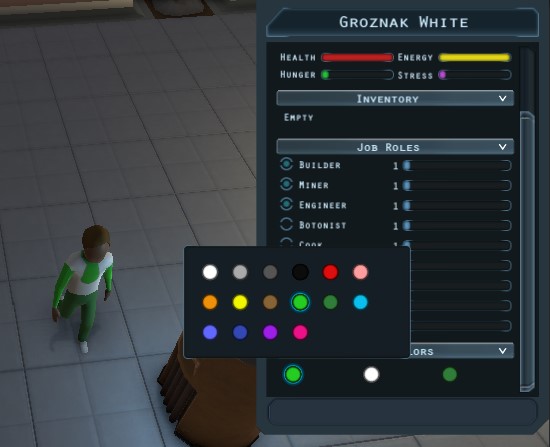 Game settings have been added and can be accessed from the main menu and in game menu. The new settings allow for graphics changes, volume control, key bindings and more.

There have been various tweaks to the user interface including new sound effects, better management of how the escape key works, collapsible sections and more.

I’m very excited about the new update and am already working on new features and updates for the next version.

Thanks for playing. Was this in alpha 0.02 or in the demo? Workers will only pickup items if they have somewhere to go such as available storage or a construction project. Most early game items require structure resin which you can get from mining wall debris or refining the mineral compound that is mined from dirt. Thanks for the feedback! :)