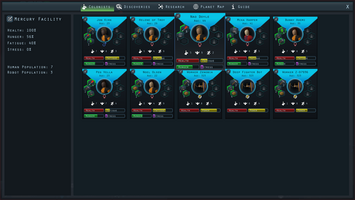 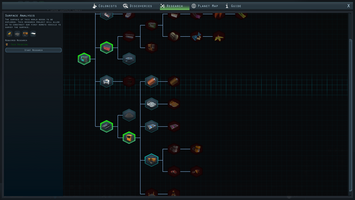 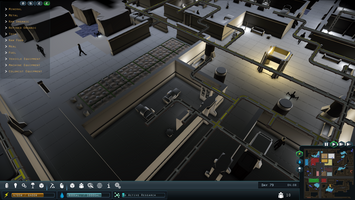 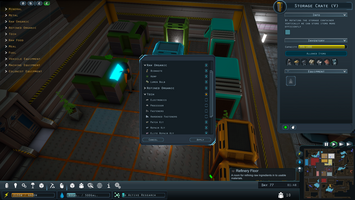 I’m happy to say that Update 20 is now available! Updates generally take longer than I would prefer, but this one has been in the oven for a bit now.

Thank you all for your patience.

As you may or may not know my father had a heart attack a couple of months ago and required a quadruple bypass. It’s been a long road to recovery, but he is doing much better now.

Colonists can now be assigned up to three jobs. Job order also determines their job priority.

The colonist management screen has been completely overhauled. Colonist cards are an easy way to assign jobs, equipment and see how your colonists are doing.

Job actions now have a success chance. Hovering over an assigned job will show the success chance, which is based on the job level and that colonist’s attributes. Different jobs are affected by attributes differently.

Every time a colonist fails at an action, they have a small chance to critically fail. Critically failing at a job action may result in an ailment, injury or lost materials, depending on the action.

Success chance will increase as colonists gain more levels in that job or have their attributes increased via equipment items. When starting a new game there is always one colonist capable of all jobs to ensure you are able to progress.

All jobs now require certain minimum attributes in order to be assigned. This means that not all colonists are capable of doing all jobs. Attributes can be modified, however, by using equipment items.

Durability drains as a machine remains in operation or is operated by a colonist. If the durability drops below 5%, the machine breaks and will require repair.

The new technician job role is responsible for repairing machines. Craft-able repair kits have been added that can speed up machine repairs.

The durability meter has been removed from objects that are not applicable.

Storage containers now show a visible capacity meter and can be assigned a custom color.

The tech tree has been visually updated. New research projects have been added for repair kits and tier II equipment items.

There are a lot of tweaks, changes and additions in this update. Be sure to check out the release notes below.

Existing save games from Update 19 are expected to function correctly in Update 20. Job roles will need to be re-assigned.